We are currently in  Singapore6:32 PM 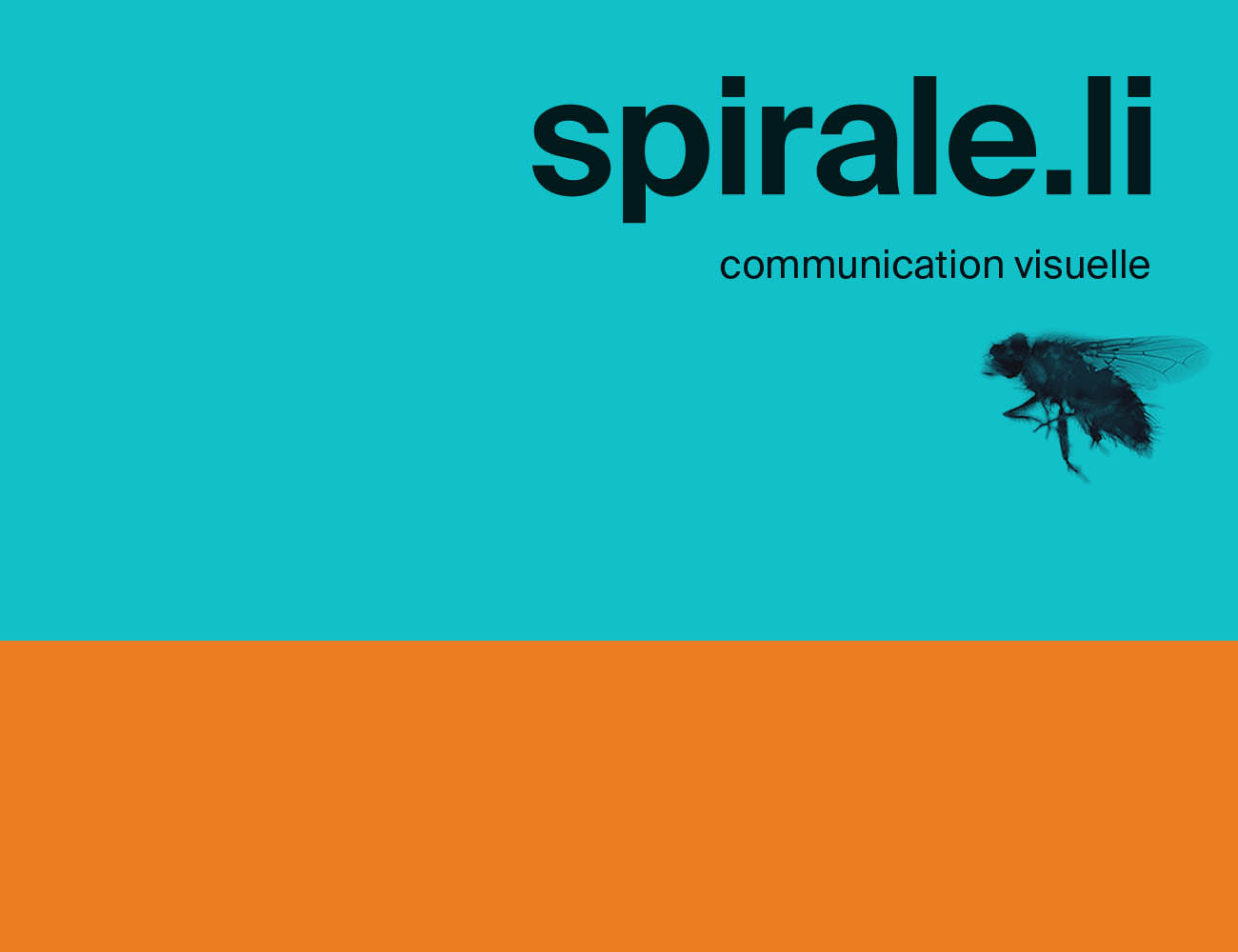 How happy I am to write this new blogpost! And above all, to introduce my guest: Alain Florey, Graphic Designer under the name of Spirale.li

I want to say that I met Alain in another life, my life as an employee. I was then a communication assistant in a theater in Geneva. He taught me, in part, my job. Having become head of communication elsewhere, we have always kept in touch.

Subsequently, he was my first client. I can say that it was thanks to him that this crazy idea came to me: “What if I started as a freelancer?”

When we are in charge of communication, the graphic designers are the ones who realize our most absurd ideas and who find the visuals that will sublimate our projects. It was therefore essential for one of my guests to represent this magnificent profession.

In addition, Alain has been working as a self-employed in Switzerland for 30 years, but has also worked in Paris. It has been a kind of “slasher” before this trendy word appeared as you will discover below. It has its full place on the blog Message In a Bottle. Especially since he is the best, we do not lie to each other!

Why did you choose this job?

If I try to find the first signs of this choice, I think it was when I was 10 years old. I found myself in a studio of letter painters , those who drew the emblems, and I found that this was a beautiful job.

When I finished the school, I did not know what to do and I should have gone back to business school. Then, I met a friend who was in his first year at the School of Decorative Arts in Geneva, in the jewelry section. I found the idea interesting and after an internship, it turned out that my meticulousness was very appreciated.

I passed the entrance exams. In the middle of the year, we visited the other sections and, when I arrived in the class of graphic designers, I decided that it would be that and not a jewelry designer.

How did you start your graphic design career?

When I came out of school, I was very unsure of myself, I thought I was rubbish and it would be impossible to do this job.

In addition, my childhood dream was to become a ski instructor. At 25, that’s what I became. I was even hired in Argentina and when I came back to Valais in Switzerland, I became a trainer in Morgins. Deep down, I knew I was not going to do this all my life.

So in 1992, I arrived from Morgins to Monthey (from the mountain to the “city”). Everyone knew me as a ski instructor, so I had to explain that I was also a graphic designer. People did not understand my job,they thought I was doing printing.

How was your beginning as a self-employed?

That’s when I proposed to Evelyne, my friend from the School of Decorative Arts, to work with me. She had been creative director in many agencies, but she said yes.

At first, it was very hard. Evelyne continued to freelance in advertising agencies and I, to give ski lessons. After a while, Evelyne went back to Geneva.

At that time, I was asked to do the visuals for the Foire du Valais (Valais Fair), which brought me visibility. Then, I won some competitions and since then, I became more solicited.

Later, the director of a local institution asked me how I saw my future. I replied that I did not know but that the question was very interesting. And if he considered to working with me he could tell me about it.

On the other hand, I told him he would never be my boss. That’s how my Paris adventure started. We became associates and we brought a graphic design studio which had publishing houses as their main clients. I shared my time between Monthey and Paris.

What did the Decorative Arts education bring you?

It’s enormous. What is interesting is that we are this generation that symbolizes the end of something and the beginning of something else in this business.

We had the chance to be 30 years old when the first computers arrived. Not all graphic designers had it. We bought one for two.

And at the same time, we were still doing photolithos on the outside, we had our texts written outside. I mean we calibrated everything so that externals people who did what we called photocomposition code our texts.

In short, we first did everything by hand. We even explained to customers what we would do with sketches!

But I think this education is obsolete today.

Why did you want to become an entrepreneur?

For fear of not being good enough for a boss. I was too scared to be told that I wasn’t good enough. And since I had been absent for several years, when I come back to graphic design, I had to learn again the job a little on my own. For example, printers also helped me a lot in preparing original documents that were ready for printing.

As I lived with nothing as a ski teacher, it allowed me to put things into perspective when I started as a graphic designer. I had nothing to loose.

At the same time, I still had some pressure, because my father, who came from a very modest social standing, was my guarantor when I had to borrow money from the bank. His father could not do it for him, so he absolutely wanted to do it for me. In short, if I failed, he would loose his house.

Gradually, I was able to repay the bank and no longer have any debt …

Never follow a brief from marketing people! For all the competitions I won, I did not follow the brief. In any case for the 80% of them.

When did you think: it worked?

I never asked myself!

But in the beginning, to live modestly, without family, without anything, it still took me 4-5 years.

Yet, there is not a single day when I say to myself, it’s in the pocket.

It’s clear that I do not have the same schedules as everyone. Sometimes I finish at 8pm, 9pm or 10pm or I work often on Saturdays.

In fact, I do not really have a typical day. Of course there is recurring work with established schedules, but there are also unforeseen events. I try to do the best, but sometimes I tell my clients honestly the time I need. Often, they understand.

In any case, I do not work with people who do not understand such situations.

I do everything to make my clients happy and make the projects happen quickly, but being alone, (sometimes with a trainee), I can not always work miracles.

How did you prospect your business?

For me, word-of-mouth has worked. I was asked for projects that gave me visibility. Then, as my graphic work became visible, I was more solicited. To be visible is the most important thing.

I have several clients that allow me to be always visible, like, for example, the Théâtre du Crochetan. Even today, people tell me, “Oh, I saw what you did!”

An entrepreneur does all his jobs alone, that’s what is difficult And I admit, that I do not like going to “knock on doors” to look for clients. It’s very difficult for me to do that. Afterwards, maybe I’ll have to do it …

On the other hand, I am a pretty good seller. If I meet someone and see that he is a little interested, I can make him understand that he has made a good choice to work with me. By the way, you have to go out and meet people!

As a former graphic designer, it’s my contribution to the next generation. During their education, future graphic designers are obliged to do an internship before obtaining the certificate.

For me, it’s the least I can do after 30 years of experience. They see what happens in a small structure like mine and what it is, the job of graphic designer.

How do you see the evolution of your profession?

I will never tell you it was better before! I would not go back !

Now, I’m a graphic designer and compared to Digital Designers or all these other new professions, it’s completely different. I did not learn them. With social networks, the job has taken another turn. I can offer these benefits, but for me, as we say, “Print is not dead”!

We are always on the screens and I still wonder where all this digital overkill will lead.

And how will the new graphic designers manage this…

Do you want ➕➕➕ about communication & marketing for your business ?

Get some tips, relevant news, exclusive offers on my services and discover the backstage of Message In a Bottle.

But there is still a step: do not forget to click the link that we just sent you by email to confirm your registration!

Do you have an advice for young entrepreneurs?

Never follow a brief from marketing people (I promise you;), it does not work! For all the competitions I have won, I did not follow the brief. In any case for 80% of them.

This is just how you can stand out. Especially now that we have access to everything that happens everywhere in the world.

What are the difficulties you face of as an entrepreneur?

I have a sixth sense to know who to and not to work with.

At the same time, I have always been very lucky and have always had very good relationships with my clients.

For me, there is no particular difficulty. Except, as I said previously, being an entrepreneur means having to do all the professions.

What is your greatest achievement?

There are 2-3 jobs that I like, which are still current today. For example, some logos. That is already a great satisfaction and acheivement, when something lasts in time.

And the other is to always be there after 30 years, if I take the example of the Théâtre du Crochetan, it is to have outlasted a few heads of culture, several directors and to be always the graphic designer, since 1996, of this amazing place which offers a very beautiful program.

And what are your goals, your dreams?

Everything is in meeting people. I put a lot into that. I’m going to move my studio and I’ll be surrounded by architects, engineers and other independents and I think that will give me another dynamic.

I love my job and I hope to be able to practice it until the end. Which is not sure, because when you say that you are a graphic designer at 55, you seem to be overwhelmed. However, I think I still have a lot to offer.

And my dream … to work more on monographs, for artists, architects, etc.